I recently went to the capital of South Korea for three days. I went by myself, since most people who had interest had either gone during fall break when I was in Tokyo or were starting to run out of money. I’m honestly glad, because I have been too dependent on others when it comes to traveling, so this was a good opportunity for me. I learned a lot about another country I have been interested in, and a future trip of a longer duration is certainly on the table.

Seoul is about a two-hour flight from Kansai International Airport. Currently, partially due to strained relations between Korea and Japan, flights are also very cheap. I was able to get a round trip for approximately 100 USD. This was almost half as much as the cost of flying to Tokyo.

What did I think? I have a lot of thoughts. I had no experience in Korean culture or language, so this was probably the steepest learning curve I’ve ever had to adjust to in the shortest amount of time. Thankfully, in terms of infrastructure South Korean public transportation is functionally the same as it is in Japan. There are a few differences to keep in mind when it comes to navigating the stations, but if you can get around Japan without getting lost, the same will go for South Korea.

Everything else was much more difficult and uncomfortable. I want to avoid generalizing, since I was just in a small part of a country for a very short amount of time, but I want to talk about what I observed.

To begin, this really drove home what draws me to Japan. Not the food, or the cool shiny things, or even the pop culture, but the people. At least to me, there is a level of kindness and hospitality among the Japanese people that I have not experienced anywhere else, not America, and certainly not South Korea.

That’s not to say there are not many, many kind people in all countries. When I arrived in South Korea, without me asking, a man helped direct me to the correct train line and then gave me free food and his contact card. There are stand-out individuals everywhere. The difference is cultural. There is a warmness that permeates Japanese culture. I can count my negative experiences with Japanese people on one hand.

It is true that much of that perceived warmness is often part of an act or service (I do love Japanese service workers though :)) and does not always reflect the true feelings of the Japanese. However, being in Japan as a tourist or visitor, (Especially a western one) feels more comfortable, and arguably that is what matters for a temporary stay. Seoul is a beautiful city, in some ways I liked it more than Tokyo. Cutting edge technology, massive landmarks, but also wisely designed and spacious streets. Aside from the train stations during rush hour, I never felt claustrophobic even though Seoul has an even higher population density than Tokyo. But I felt a certain level of coldness among the residents. Not an aggressive rudeness like you find might in America or elsewhere, but it was there, and it was uncomfortable. Incidentally, Seoul is the largest city in South Korea and one of the largest in the world (It is bigger than New York!), but I noticed far less foreigners there than many smaller cities I have been to in Japan. There was a real feeling of isolation, like nothing I had ever felt before.

Despite some of my discomforts, I enjoyed Seoul. South Korea is without a doubt one of the best foreign destinations for solo travelers, thanks to its public transportation and a high level of safety that is comparable to Japan. For a still very inexperienced traveler, it was a very safe bet. I am glad I did this, things in my life that used to seem difficult or intimidating certainly seem much less so now. When I return, I will try to have learned some basic phrases, see if I can reach a higher level of understanding of the culture, and maybe break down more barriers between myself and the locals. 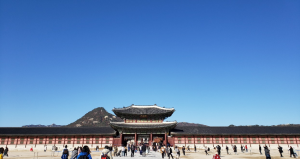 The entrance to Gyeongbokgung Palace. The most visually striking place I saw in Seoul. 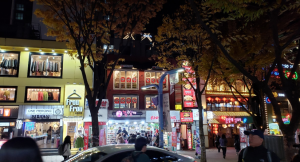 Part of Hongdae district. Known as the “young people’s” district. Full of shops and street performers. 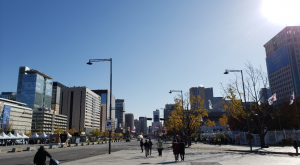 I found the streets and sidewalks to be more spacious than Japanese cities. Not the case everywhere, but I was pleasantly surprised. 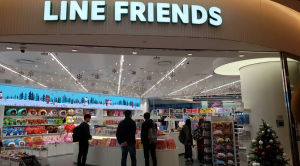 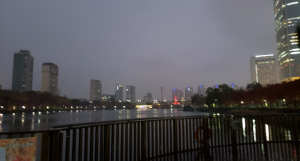 The night views did not disappoint me.

In order to complete field research for my internship here in Chennai, I took to the pavement of a bustling commercial neighborhood to map and record 6 different attributes for the area’s street vendors. Witnessing the vibrancy of Chennai’s streets is one thing…being engulfed in it is an entirely different experience. 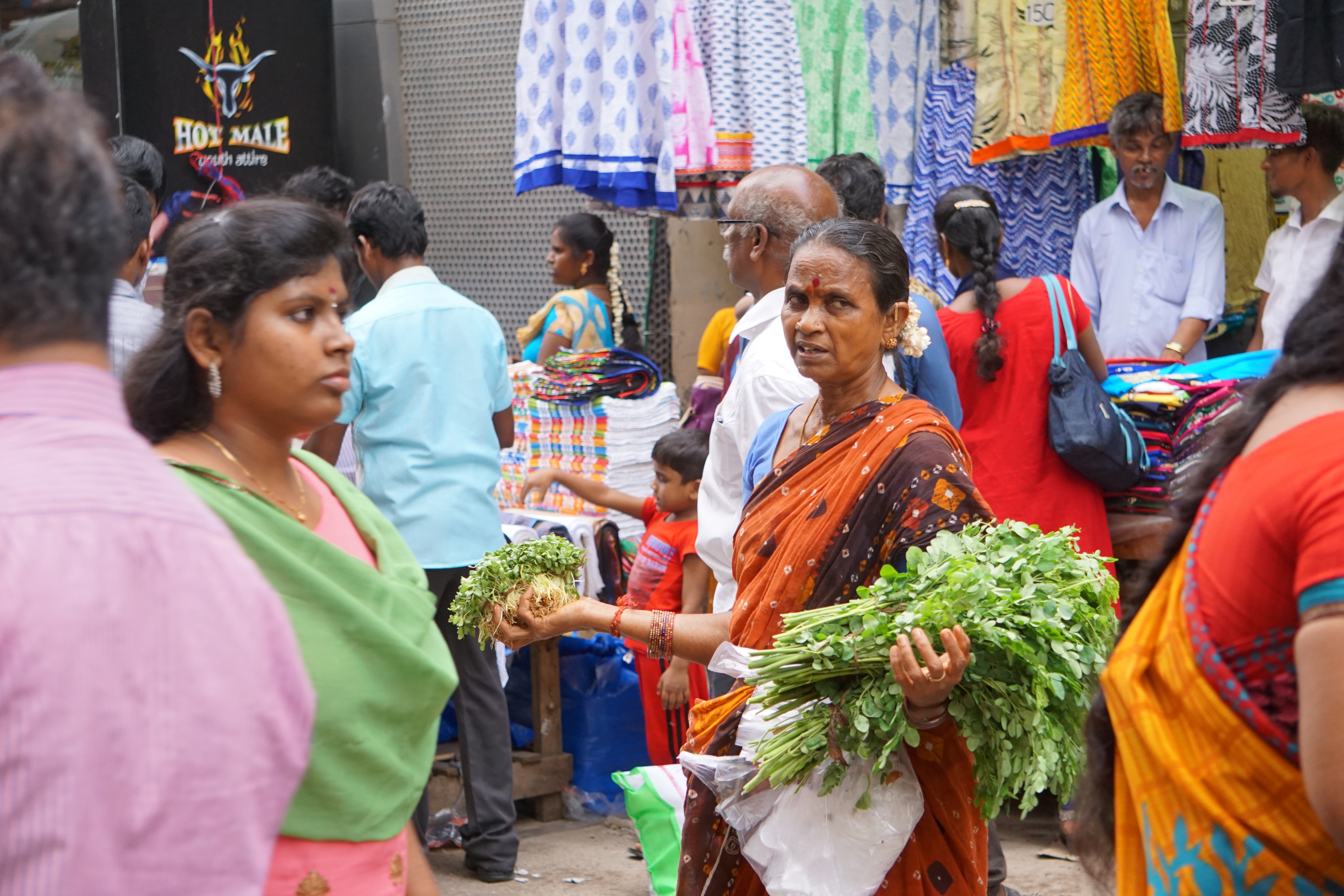 With the clipboard cradled in my arm, I walked down one of the neighborhood’s streets to map its 270 street vendors. However, every few steps that I took I had several sets of eyes peering over my shoulder. The people were not shy about their curiosity—they literally placed their heads upon my shoulder and would even tilt my clipboard so they could see what I was writing. I would walk further on, trying to break my way through the pounding stares, inquisitive minds, and prying questions. Street vendors would then congregate around me, only to throw words around in their native Tamil language and provide me with more looks of concern. I tried settling their unease. I repeated to them, “school project, school project.” I received head bobbles of content, after which I then continued on my way for the next set of curious eyes. 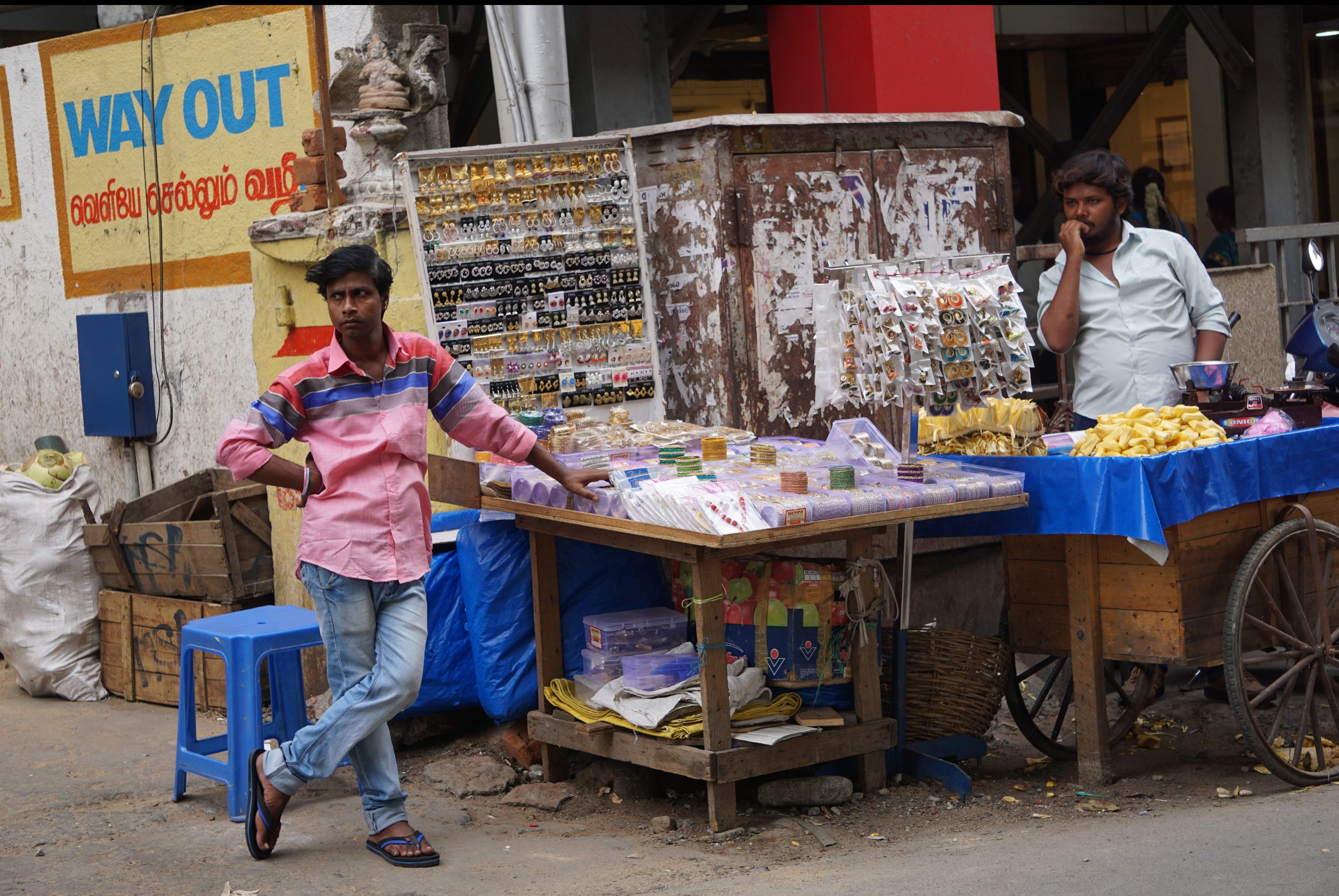 I do realize that I gave the people plenty to stare at. I was, after all, a solo white female holding a clipboard and pen. But despite this, I have found the people to be quite curious and inquisitive of their surroundings. It is common for people to take account of their peer’s purchases at the store or to analyze the latest math test score of their child’s top classmate. And I see this same curious attitude in the nation as a whole. As India looks to traverse their pathway towards progression and development, they look outwards to developed nations. However, in doing so, their eyes can become focused and latched on the Western way of life…seeing the world as it has been crafted—a Eurocentric world.

But be mindful, beautiful India. You are dazzling as you are, with your never-ending surprises of activity. Your infrastructure does not mirror that of Europe’s finest crafted plazas. Your stores and shops are not clean cut. But there is value in that…your differences are to relish. Be mindful, beautiful India. Incorporate modes of development where it can benefit your people, but remember to hold fast to the charm that sets you apart.

After being in Chennai for 3 weeks, I have come to better understand the people and the culture with each passing day.  I can cross the street through the weaving traffic without getting hit, I can decipher about 6 items on the menus at restaurants, and I can shuffle and nudge my way to the front of the line at the produce store as to not let every single customer cut me.  However, there is still one aspect of Indian culture that continues to bring me uncertainty…the head bobble.

The head bobble is reproduced by Indians with almost every human encounter.  When someone does the head bobble, the head lightly and loosely floats from side to side with the ears dipping down towards each shoulder.  It is a bobble of the head rather than a strict nod or “no” gesture.  As for the facial expression, there is little change in the person’s displayed emotions.  The head bobbler retains an expressionless front. 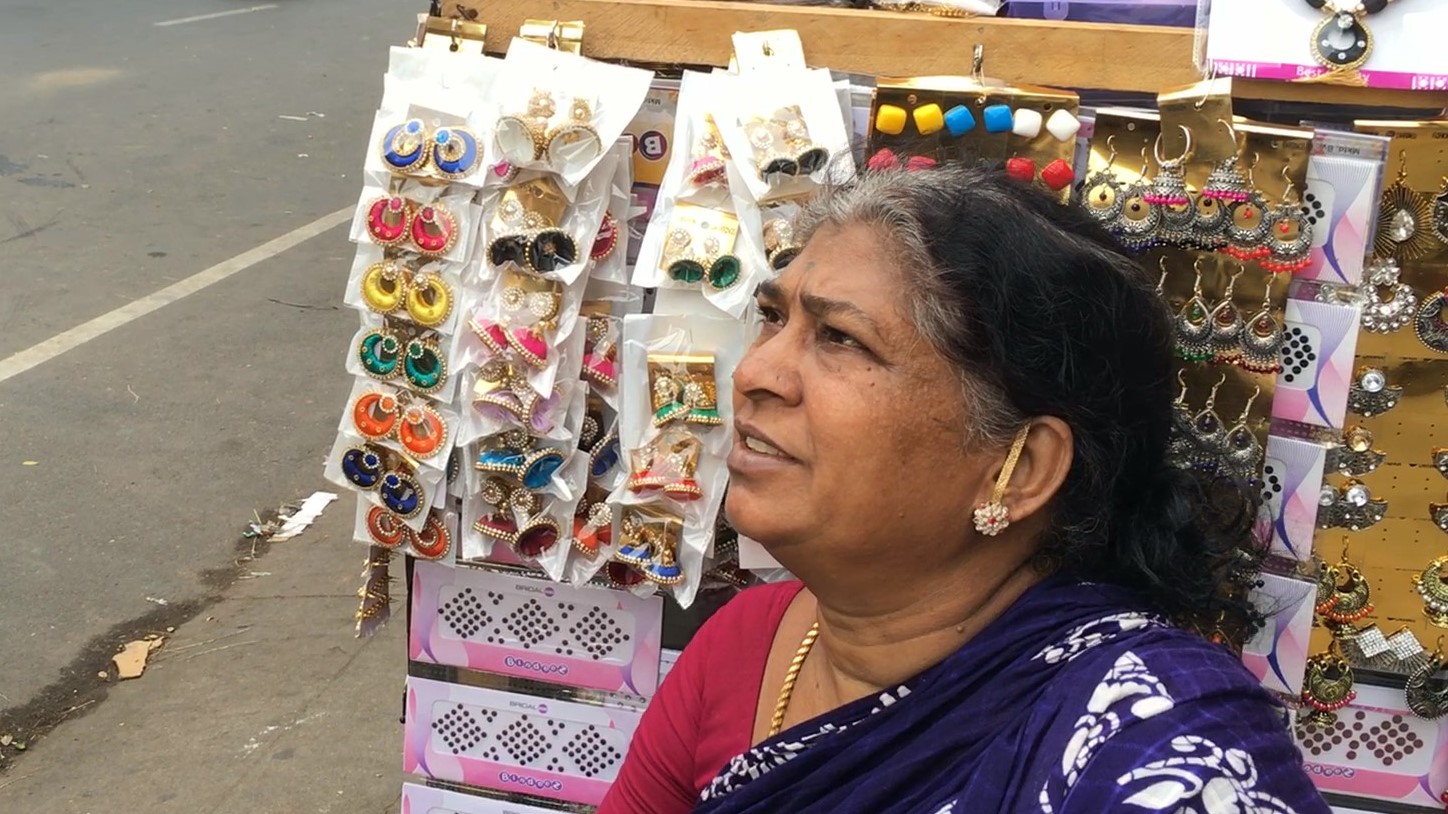 So, what does such an inherently vague gesture mean, exactly?  Well, I’m still not entirely sure.

As an outsider to Indian culture, I try to observe and understand my surroundings as much as I can.  I search for patterns and continuity, and then correlate the actions with a certain meaning.  But after 3 weeks, the head bobble still stumps me.  I ask the auto driver if he has change, and his head bobbles.  I discuss my goals for my project at work to my boss, and her head bobbles during the entire conversation.  I order food at a restaurant, and the waiter’s head bobbles.  During lunch, I sit across from a co-worker whose head bobbles as she chews each bite of her mother’s home-cooked meal.  I ask the hotel receptionist if my room can be cleaned, and his head bobbles.  I search for jack fruit at the produce store and cannot find any; I ask the cashier if there is any in stock, and her head bobbles. 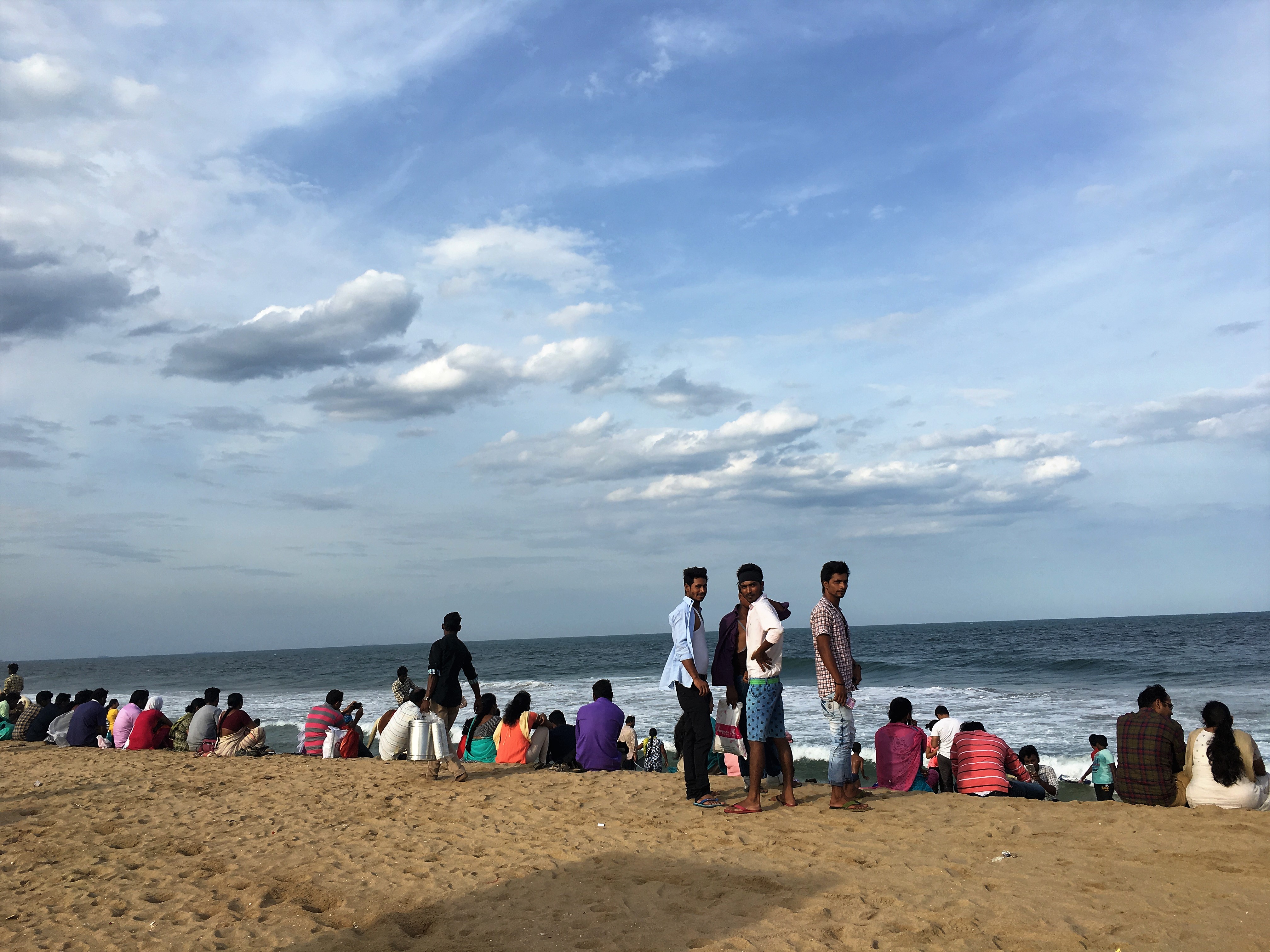 Nine thousand miles from home, India sometimes feels like a separate world.  It is so easy to hold tight to my own perceptions on life and use these to define everything that I see here.  But in doing so, I will misinterpret all that there is to learn from India.  So, I have 5 more weeks of my Indian adventure…let’s see if I master the head bobble.  And just maybe by the end of my time here, I’ll be bobbling with every person that I meet. 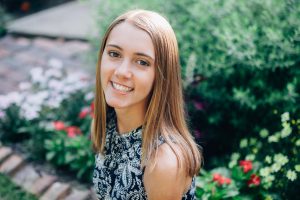 I chose to intern abroad because there is no better way to expand your frame of mind than going abroad.  By going abroad, I can actively explore a new culture and learn more about the world in which I live.  There is so much to learn from and discover beyond the boundaries of the United States.  I am looking forward to gathering a new perspective on life.  From what I have heard, it is a whole different world in India.  I am excited to live in the bustling city of Chennai for 8 weeks and see life from a different vantage point.