Started from the Bottom…

I chose to do my semester abroad in France this year because I wanted to improve my French language skills. In high school, I was given the opportunity to do the Indiana University Honors Program in Foreign Languages for High School students, which greatly accelerated my French learning. But since then, I haven’t had many opportunities to use my French, besides in French classes. So, it seemed the natural choice to come back to France and ameliorate my French speaking and reading skills.

My French has definitely improved since I arrived in Cergy. I speak French with most of my friends here. I listen to French music and read books in French occasionally. My classes are conducted exclusively in French. In the first class I had back in January, I was completely lost. I basically understood none of what my professor said and spent most of the time reading off of her PowerPoint. I can follow her much more easily now, thankfully.

There have been a few embarrassing moments, though. For example, I was at the train station the other day, and somebody asked me if the train went to Paris. I told him yes, it does. Just as I was congratulating myself on looking confident enough to be asked questions, he asked me something else. That time, I had to ask for clarification. Once I got from the train station to my destination, I went into a Parfois store to buy a bag, and had to ask the clerk to repeat herself THREE TIMES! That was definitely a little embarrassing.

Every time that something like that happens, though, I remind myself of three things: 1. I’m here to learn, and asking questions is the best way to do that; 2. If the person I’m asking for clarification were in my shoes, he or she would not want me to get annoyed by being asked and 3. Just nodding and saying yes or no when you don’t know what the person is saying often gets you into more problems than you would have if you just asked for clarification. So, I ask. And people get annoyed with me. And then we move on, hopefully the better for it.

Sometimes, people do hear my accent and immediately switch to English, which can be frustrating. I feel like French people often assume automatically that Americans don’t want to practice French. While that may be true for some people, I enjoy speaking French. At this point in my trip, it’s actually difficult to speak English when I hear French being spoken around me, or when my friends are speaking French with each other. My brain is so hardwired to expect French in certain situations, it’s hard to switch back to English.

But overall, I think using French all the time is an incredibly rewarding and interesting experience. Our language is so tied to who we are, how we define ourselves, and where we come from. I speak English because I was born and raised in America; I speak French because I was lucky enough to go to a school that offered classes, and I took the initiative to learn it. French has shaped and redefined my life in ways I never could have imagined when I sat down in my first French class in eighth grade.

Studying French has taught me – and continues to teach me – how incredibly vast the world really is. Yes, we say the world is small because of how quickly and easily we can travel, and the massive use of social media today. But in reality, the world is not small. There are billions of people on Earth, and each one of them has different experiences every single day. Whether that be through language, culture, or religion, every single day is unique for every single person. I am blessed enough to have widened my world by studying French.

This was a rather sappy post, but it’s true! I know I’m going to miss speaking French when I get back home to the U.S. I won’t have any reason to use my French on the daily over the summer. Now please enjoy this photo of some graffiti I liked. It says, “There is no luck, there are only meetings.” 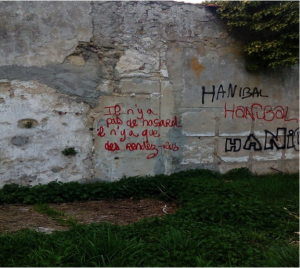 Roughly I think it means that there are no chance meetings. People (or things) come into your life when they’re supposed to.