Studying abroad is simultaneously exciting and scary in many ways. Personally, I worried about leaving my community behind for almost six months. Coming to France meant 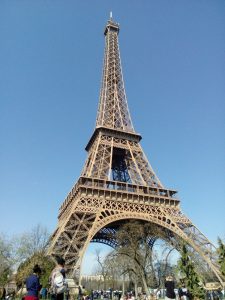 leaving my VU friends and sorority sisters, as well as my work friends and family behind. What if I didn’t meet anyone in France? What if I spent the next six months without anyone to talk to or explore Paris with?

It’s taken a little while, but I’ve met many new people at Cergy, Paris, and even Cambridge when I went to visit the study center there. Everyone I’ve met is so nice and welcoming. It’s really nice to have people to talk to and connect with when I’m so far from home.

One cool example of connecting with a new community is this past Saturday. There are lots of pages on Facebook where people can reach out for advice, insider tips, or just to meet up and have a cup of coffee. Lauren, my fellow VU student here, decided to host a picnic on Saturday, under the Eiffel Tower. She posted on Facebook, and a ton of women commented saying that they wanted to come.

Saturday dawned bright and cheerful, so we packed a lunch and headed into Paris. We planted ourselves in a sunny spot and waited. It took a little while, but twelve women eventually showed up! They all brought food and we introduced ourselves (several times, as people arrived at different times). We talked and ate for hours. In fact, I ate way too much and slightly regretted it later. French food is so good, though. How could I resist?

The amazing thing was how easily we all fell into conversation. We were one of the most diverse groups I’ve ever been a part of; there were women from Sweden, India, England, Germany, Denmark, and Egypt. We shared cultural differences and laughed at the difficulties of living in Paris as foreigners. We truly connected over shared experiences. One of the women named our group the Pique-nique Chics, which rhymes when you say it with a French accent. This picnic was truly a remarkable experience that I’ll remember for 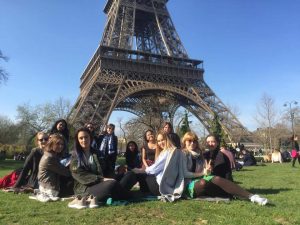 the rest of my life.

Afterward, Lauren and I had drinks with a few friends she met in Paris. I met Theo, who is half English and half French. It was fun listening to him switch back and forth between speaking French and English. I also met Scarlet and Richard, who are two best friends who moved to Paris in 2002 and have bounced between here and Fort Lauderdale, Florida ever since.

Again, we fell easily into conversation and shared life experiences and stories. There we were in what I felt was a typical Parisian scene: sitting outside a café somewhere in the heart of the Marais, discussing life and politics and culture. Honestly, we probably annoyed the Parisians with our loud American laughs and continual switching between French and English as the night grew older and we grew more tired. (The thing about speaking a foreign language is that it gets a lot easier when you’re really tired and don’t really care what you sound like anymore).

I left the café that night exhausted but thrilled to have met so many new people. Sometimes, you make a fleeting connection with someone. You talk to them a few times and never see them again. While I may never see anyone from Saturday again, what really counts is the impact those connections made on my life. In just a short amount of time, I saw Paris differently. It turned from a cold, aloof city into a place where people actually live. It’s not only about the place where you are; it’s also about who you’re with. Community is out there, even in the most unlikely of places. It may just require you to leave your corner of the forest and go find it.

A Calm Under the Waves