Dear readers, let me tell you about my friends, the vigilant pirates. They’re swashbuckling, treasure-plundering guys with peg legs who sail ships and say, “Arrghh!” a lot.

Just kidding. They’re actually men who wear camouflage and red berets and bulletproof vests and carry big assault rifles and walk around Paris and the surrounding cities making sure that nobody’s planting a bomb on the metro. They’re called VigiPirate. 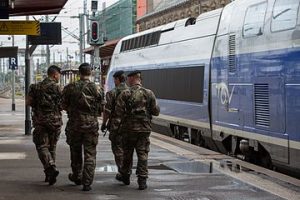 Seeing the VigiPirate guys reminded me that the threat of violence is still very real. The France that I fell in love with during my first study abroad program four years ago is a different place now. It’s still healing from the November 13, 2015 attacks on the Bataclan and the Stade de France.

I remember exactly where I was when I heard about that attack. I’d been at work all day, so I hadn’t seen the news. I went to a friend’s house right after, where somebody mentioned it. I was crushed, devastated by the vast and unfathomable violence that had befallen the place I so loved. Why would anybody want to hurt France? Why would anybody want to hurt anybody, period?

And where else have similar attacks taken place since 2015? Belgium, Sweden, London, and France. To name a few. And what do we do when we hear about this violence? We change our profile pictures to show the affected country’s flag over our carefully positioned selfies, and we say, “How terrible!” And then we move on.

But what else are we supposed to do? Are we supposed to rally in anger and send bombs into heavily populated areas in war-torn countries like Syria and just kind of hope that we hit the right people? Do we drown in grief, and thus cease to function? Or do we stop living our lives because of the sheer terror of the threat of violence?

I wish I knew the answer to this question. I wish I knew the way to stop all of this violence from happening, period, but I don’t. I am a twenty-one-year-old woman studying abroad, and I know no more about maintaining world peace than does the seventy-year-old man sitting in the capital of my own country.

Of course, it’s not like the United States has never been the victim of terrorist attacks. The World Trade Center was a thing. There are some people my age who will tell you that they remember 9/11 happening, but I don’t. I wasn’t yet six-years-old. My time was occupied with playing with my brothers and trying to convince my parents to let me adopt a dog.

I may not have specific memories of 9/11, but I’ll remember November 13th, 2015, for the rest of my life. I’ll remember Thursday, April 2017, too. It was just a few days ago that a young police officer (a member of France’s gendarmerie) was killed by a terrorist on the Champs-Elysée. His partner gave a speech at the memorial. And France mourned yet again.

I said before that I don’t know what to do in the face of this kind of violence, but that’s not completely true. I know that we must not succumb to hatred. We must not fear each other, because we are all we have. If we live in a world where hatred and violence are the norm, we will lose the only thing that keeps us human: each other. In the words of someone who knows much more than I do, “You will not have my hate.” Vous n’aurez pas ma haine.