Last week, Chile had its national Labor Day, and most businesses, supermarkets, and restaurants shut down for the day to give workers time to rest and be with their families. It actually started a day earlier, with most places closing around 6pm the night before. So with our extra day off, my friends and I decided to take a mini-vacation up to the north of Chile, in the Atacama Desert. It’s widely known as one of the driest places on Earth, with an average rainfall of .6 inches per year. One friend, Delaney, and I went first, with an extra day in the town San Pedro de Atacama before the rest of our group joined us. We rented bikes and rode around for half the day, in search of an abandoned tunnel in the middle of the desert. It was extremely hot, which was a nice change from the cloudy, chilly weather that we’ve started to have in Viña del Mar. On the way, we actually ran into a family of wild cows! They were so cute and fluffy, and actually allowed us to get super close to them! 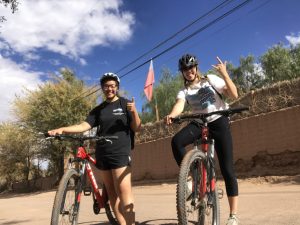 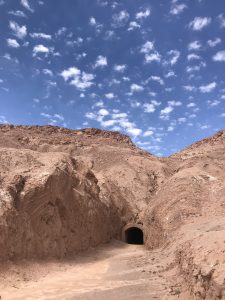 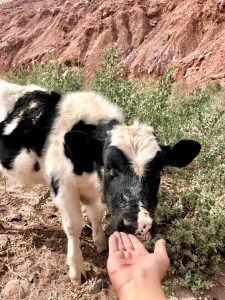 The next day, four friends from our program met us in San Pedro. We spent the next few days exploring the desert and seeing some of the most incredible landscapes I’ve ever seen. One day, we decided to take a tour to the 3rd largest geyser field in the world, but the largest in the Southern Hemisphere. The tour company picked us up from the hostel at 4am so we could see the sunrise over the geysers. Despite being so hot during the day, it was surprisingly cold at four in the morning! My friends and I had to wear multiple layers, scarves, gloves, and very thick socks to survive! But regardless of the below freezing temperatures, it was well worth it. The views were amazing, and even though we were all tired and cold, the girls and I had a great time learning about the geysers, practicing our Spanish, and experiencing the unforgettable sunrise together. After a few hours at the geysers, the tour took us to a few more spots in the desert. This included a natural hot spring, a lagoon, and a cute town with a tiny church and only 5 families living there! 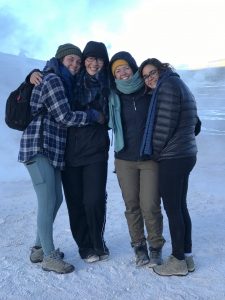 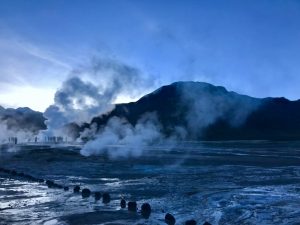 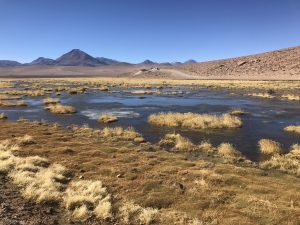 Overall, the girls and I had a great time together. Every night we hiked to nearby viewpoints to watch the sunset, and every night we were in awe. The sunsets in Viña del Mar have been really great, but there’s something extra special about the sun setting in the desert, with nothing but mountains and volcanoes in the distance. My friends and I have decided that the views we’ve seen in Chile, from the northern Atacama Desert to the southern Patagonia region, have been the most impressive we’ve seen in our lives so far. 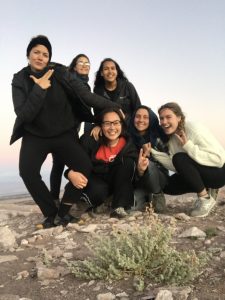 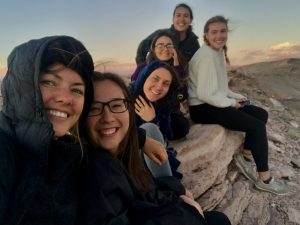 My short trip (only Wednesday to Monday) to northern Chile has been, so far, one of my favorite experiences this semester. It was extra special for a few reasons. Firstly, I got the chance to see landscapes that, in photos, actually look photoshopped. Each day was full of sceneries that took my breath away. Plus, how many times can you say that you saw the sunset in the driest place in the world? But another really important reason why I loved this mini-vacation was because of the people I spent time with. In addition to the lovely girls from my program that were with me, I also randomly ran into someone I met in the very beginning of the semester in Viña del Mar, over 700 miles away. In the first few weeks of the semester, I went out in Viña with some members of the UVM international club. I ended up spending a few hours talking to a Chilean local, who did magic for my friends and me. It was really cool! Then, 2 months later, over 700 miles away, I ran into the Chilean magician again! It was such a chance encounter, and it made me realize how small this world really is. The more I travel, the more I realize that the world isn’t as big as I used to think. Everyone seems to be connected, and I’ve learned to look forward to the next time I run into someone I know, whether I’m walking in downtown Viña del Mar, or exploring the driest desert in the world.