OK, so it’s not Jumanji. It’s an agroforestry system in the Costa Rican lowlands of Limón, a tropical region, with many more bugs and critters than I am used to, found all over the area, and a heat and humidity that does not change or abate. But, to this US mid-western girl who’s never been this close to the equator, bumbling around this pathless farm inside a tropical forest, where hardly anyone else ventures, felt a bit like falling into Jumanji.

For the month of April, I am staying with José Moore and his family in his house on the front part of his property. He lives on his farm, where they grow banana and cacao, the plant used to make chocolate, and a few mango trees. My purpose here is to gather data for my independent research project for the field biology program with ICADS (Institute for Central American Studies), in which I am participating for the second half of my semester apart from the rest of my Valpo Cohort, while they work at internships (see my 5th Blog, So Much Traveling!, for more information about my the Environmental/Biology program with ICADSJ). My research is focused on vegetation measurements and bird species analysis. I am comparing two sections of the farm to see if a difference in basal area, canopy cover, and/or groundcover (vegetation measurements) results in more habitat for more biodiversity indicated by the number of bird species found in the area. 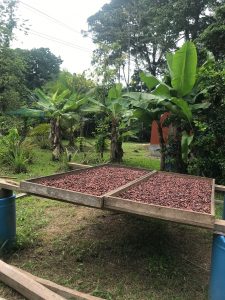 Metal trays located at the front of the farm to the side of the house where cacao is dried before it is sold. 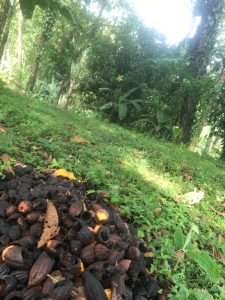 A pile of cacao shells, one of many found all over the farm

One day during the first week, I prepared to explore the back half of the farm on my own. No one had taken me into this section of the farm, but I needed to check it out in order to start my research. After staying on the path to bird watch, I tried to walk around the border of the farm along a road and nearly got attacked by a dog which was bigger than the mastiff my family had growing up with. I tried to go down a slope instead, but was unsuccessful. It was so steep I could not walk on it. So, I decided to walk along the creek, which goes straight into the bottom of part 2 along its border. I stepped in a wasps’ nest and ran away screaming and swatting myself. I walked back to the house, my shoulder, chest and back stinging where the wasps had flown into my shirt. After this little adventure I was not too keen on going out into the second part of the farm another time. Indeed, I was afraid of the farm. Aside from these things, I also encountered many other things which deterred me from going into the farm alone; spiders nearly the size of my palm which wove huge golden webs, plants which when walked into, leave stinging red dots in an arching row across my legs, trees with thorns longer than my thumb, very many insects and ants of different kinds, and above all the fear of stepping or falling on a poisonous snake whose bite would be lethal. 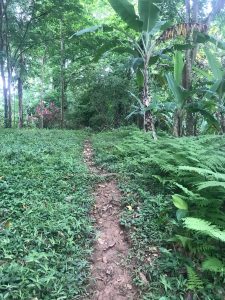 A part of the trail running from the house at the front of the farm to the back of the farm. This is the clearest, easiest area to walk on the farm 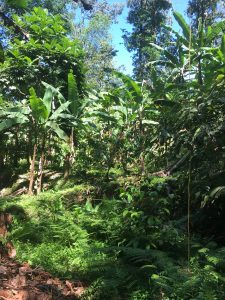 A view of banana and ground cover

Despite these things I got back out into the farm to do my research. After a few weeks of spending 7-10 hours out walking around each day, I realized that I had become comfortable on the farm. The path has become so familiar that, when in a hurry have jogged the steps it takes to leap upon the concrete blocks and iron bars in order to get across the creek where I had originally gone slowly with caution. I learned by heart the trail and many areas off the trail, and became confident that I knew where I was going. Although I have only been in Limón 3-4 weeks, it has become like a home, and I have learned to love this farm that I originally feared. I am honestly impressed at how quickly I was able to become accustomed to this place. 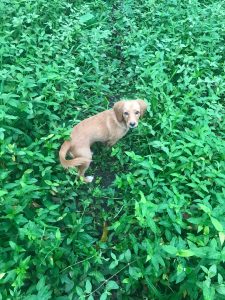 The Moore family puppy, Mia, following me around during my early morning bird watching

Trip to the Blue Mountains

Why should you study abroad in Viña del Mar, Chile?