The other Valpo student and I traveled to Costa Rica under tourist status, meaning that after 90 days in the country we needed to leave Costa Rica to renew our visas. Thus, in mid-April, we went on a trip to Panama!

There were a couple subtle differences I noticed between Costa Rica and Panama. First, after two days, I noticed that handshakes were normal. At first I thought I was receiving handshakes because the people there knew I was from the United States, trying to be welcoming. But, I received only handshakes and was never offered a kiss on the cheek. I may have imagined it, but the handshakes did seem a little firmer and more practiced than the ones I have received in Costa Rica. A clarifying question to our guide confirmed that handshakes are the normal form of greeting in Panama. The handshake is probably due to the influence of the United States in their country.

Another thing I saw in Panama which may have been influenced by the United States was the military base near the Nazo indigenous community. The buildings in the base were painted with the same brown and green army pattern as I have seen used in the United States. We were told that the soldiers in training were brought to that point, where they learn jungle survival in order to outlive their opponents. There was a platform where the soldiers could face a flag and salute. Embarrassingly, when I first saw the painted buildings I thought the camp was originally a US training camp. It very much resembled a United States style military training camp. I cannot help but think there must have been some really heavy US influence there. By contrast, Costa Rica is a very peaceful country, and basically lacks a military.

In a way, the similarities between the US and Panama made me feel just a little more at home in Panama than I did in Costa Rica. Though there were only very minor differences, having more cultural similarities can make a person more comfortable in an area though they are very far from their original country. This, obviously, applies even when there is a language barrier, as I had the same challenge of understanding Spanish in both Costa Rica and Panama. The realization that even small similarities between a foreign culture and home country can facilitate ease during transition and comfort brings up a number of questions. I would be interested to see if I would be more comfortable in a different culture which speaks English.

My experience in Panama compared to that in Costa Rica serves to highlight the fact that our cultural norms, such as common greetings, is instilled in us so that when our norms are followed we feel “normal” and when we are not used to the norms, we feel strange. From now on I should have a greater appreciation and awareness for people who are new to my own country. 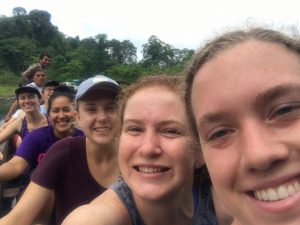 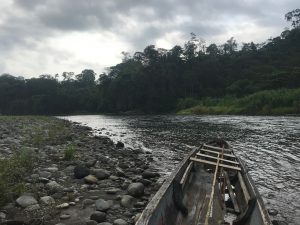 A boat on the beach in the Nazo Indigenous Community.

Getting Involved While Abroad