Back to Santa Rosa

I had assumed I would feel relief once I returned from rural Limón to the more familiar and suburban Santa Rosa because I would be in a more urban environment. But, what really stuck out to me was the amount of affection I received the first few days of being back. I felt welcomed back into the entire community, first by my host family, and then many others; friends from Frisbee, the other Valpo students, families and young adults who live at Casa Adobe (the house where we take classes), and the other students in the Field Biology program with ICADS. After returning from Limón, it became clear just how many different groups of people I had gotten to know and become a part of in the San Jose and Santa Rosa area during the first couple of months of my semester.

During my last couple weeks staying in Santa Rosa I became much more comfortable in the area. I am not sure if I felt more comfortable because I had grown more use to the culture of Costa Rica during the month of April when I was in Limón, or if I had missed Santa Rosa while I was away. For whatever reason, I felt as if there was a click in those last couple of weeks, as if I had taken on the country’s culture and it had become more natural to me. I greeted people in a typical Costa Rican manner without thinking too hard about it, I rode the train and traveled around with much more ease, and I found the rhythm of life to be more comfortably familiar. It became my home, because I had adjusted. Speaking Spanish also became much easier in the last couple of weeks in Costa Rica. Again, it was as if there was a click in my brain and I could understand much more and speak more fluidly so that I could more easily enjoy conversations and social gatherings. I was greatly pleased with this change in myself particularly because of how far I had come since the beginning of the semester, when I had been shy and uncertain of almost every action I took and had found it very difficult to understand or speak the language.

My integration into the community of Santa Rosa made leaving harder. The people there are very warm and friendly, and have a life style centered around family and friends. However, it was proven to me that it is possible to become a part of another community and make friends rather quickly, even when there is a language barrier. I am encouraged to lean into my community, by getting to know and spend time with people as well as paying attention to the needs of others living in the area around me, when I return to my home in Valparaiso. 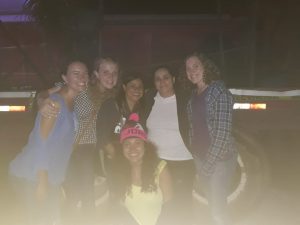 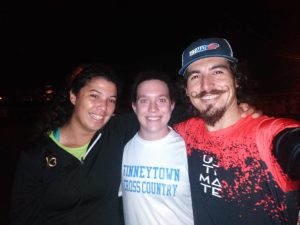 Nicole (left), Paul (right) and myself (center). The three of us all lived in Santa Rosa and played Ultimate Frisbee. We would ride to practice and team gatherings together in Paul’s car, and they became some really close friends of mine.