One thing I have always loved about the randomness of life is meeting new people. Not over a technological or social platform, but randomly meeting someone at a cafe, at a movie, a school event, or anywhere really and having an instantaneous connection with them. One thing you learn all throughout life and while studying abroad is that these true connections might not happen very often. There are many circumstances as well where you meet new people and you just don’t connect with them, and that is just a part of life. It’s the moments when you meet people and do connect right off the bat and enjoy being around them, that can change the course of your life in so many beautiful ways. While studying abroad, I have found myself in both of these situations. There have been many people that I have met and haven’t clicked with at all. The hardest part about those instances is that at first I thought I was connecting with them. But overtime I learned that it was because I had simply just met them and didn’t know them yet. Moments like these though just make the instant connections that you do experience with others that much better. I’ve experienced many situations like that while studying abroad, but one of the most memorable friendships I have found while here was when I was least expecting it.

Facebook is a huge thing here in Australia. Everyone here is on Facebook, it is used more than any other social platform. All of my friends at the University of Newcastle use Facebook messenger to talk to people, make events pages on Facebook, and simply keep in touch with all of their friends through this platform. To find out what is going on around town and around wherever you are, you check Facebook. So one night I was randomly looking through Facebook events in my area, I found a movie that was premiering for one night only at the local theater. The premise of the movie is talking and discussing the birth of the conservation movement for the oceans and water systems of the world. So being an environmental science major, this interested me very much. I asked some friends of mine if anyone would have liked to go, but everyone was either busy or weren’t interested. So I ended up buying a single ticket and planned to go to the movie event with myself. I was a little nervous about this because the movie theater was quite a ways away and I would be going there alone during the night, but I wanted to push myself to do something new so I went for it.

When it came to be the day of the movie, I got myself ready and took the bus to the movie theater. This wasn’t like any ordinary movie event, this was a one time premiere where the makers of the film were there and would be answering questions after people had watched the movie! It was an amazing time. I got to the movie and got myself a popcorn and got ready to watch the movie. As I walked into the theater and was searching for a seat, I saw an open seat next to a random girl. Almost all of the other seats were taken, so I just chose to sit by her. Before the movie started we had introduced ourselves and were chatting about our shared interests in environmentalism and ocean conservation. We had really connected and wanted to talk more with each other, but the movie was starting so we quieted down and focused on the screen. After the movie the filmmakers did a Q&A, which lasted longer than I had expected since I had planned to take the 9:45PM bus back to campus. The Q&A went until about 10PM, and the next bus wasn’t going to come until 11:15PM. I really didn’t feel safe sitting at the bus stop for more than an hour by myself so late at night, so I asked the girl I had met if she could possibly give me a ride back to Uni. Thankfully she was happy to help me out and said she’d be able to give me a ride! During the ride we chatted some more and planned to hang out again to see Caves Beach, a famous beach near Newcastle. So the next weekend we ended up hanging out again and headed down to Caves Beach where near it the “Living Smart Festival” was going on. We spontaneously went to the festival and walked around, then we ended up going to the beach and spent the day laying in the sun. 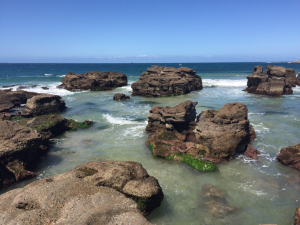 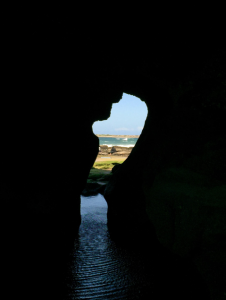 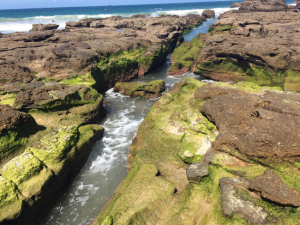 All three pictures from Caves Beach near Newcastle

After that we have hung out a few more times and have really bonded. She graduated University with a degree in environmental science and marine biology and has helped me make connections for potential jobs in the future (in Australia and the US). I was so grateful to have met her and to have pushed myself out of my comfort zone by going to a movie alone in a new place. If I had never done that, I wouldn’t have met Abby and made the connection I did with her. Overall, I hope people will hear this story and that it inspires them to get out of their comfort zones while abroad, because you never know what may happen or who you may meet wherever you go.

Tokyo, take my heart (And to an extent, my sanity)