As a Political Science and French double major, I always knew that I wanted to study abroad somewhere in France so I can be fully immersed with the culture and language. However, I never would have imagined actually having that dream of mine come true. As many students who have studied abroad know or who are currently applying to study abroad, the application process is tedious and the transition to a new country can also be a bit difficult. On the other hand, the experience received by being able to study in a different country is unforgettable. I decided to study abroad through the program provided by Boston University which includes half the semester of classes and the other half we get an internship in our concentration.

Currently, I have been taking classes that started on the 6th of September and will be ending on the 25 of October. The classes I decided to take were art history, the study of French cinema, theater, and songs, and a language course on French writing. I made the decision to take courses that would help me obtain a better knowledge on the French culture and not just on the language. My art history class has exposed me to not only the history of art but to the meaning of art in France especially in Paris. For instance, art in Paris is important in their culture and it’s a conversation started, as well, because as my professor said art is one of the first things French people were exposed to because it is everywhere. Throughout this course, we have visited the Museum of Orsay, Museum Marmottan, the Nation Art Museum of Centre Pompiduo, and Palais Tokyo. The course began from the classical art pieces to the more modern pieces of art and we talked about how each style of art was influenced.

(This was at Musée D’Orsay)

My other course on cinema, theatre, and songs offered me the same opportunities with outings to go see French films in the movie theaters and see French plays at the theaters. This course has been teaching me about the law on French radio stations and about the culture around plays and movies. For example, I learned that French radio stations have a law where their music that they play has to be 60% French music and cannot play the songs numerous of times throughout the day. The reason they have this is to help make sure those hearing music on the radio are being expose to different types of music. In addition, this course was a bit more difficult than the others because when the class would go to the movies or the theater there were words that I could not understand and sometimes the dialect spoken would be challenge. Because of this, I always had to remind myself that it’s okay not to know everything that is being spoken because this is the reason why I am studying abroad, so I can speak more fluently the language and understand the culture and traditions here.

So far, I have been very pleased with the decision to study abroad in Paris. Every day I am exposed to new challenges where I am forced to get out of my comfort zone. For instance, in the beginning of the program, I had no idea how the metro worked and how to get a metro pass so I was forced to ask multiple people for directions and assistance in a language where I did not feel that I could fully express myself. On the other hand, now the challenges for me are figuring out where I have not explored yet and making sure that I speak French almost the whole time with my friends so that I am prepared to speak it at my internship which is at a law firm. Overall, I look forward to learning new expressions and words from Parisians around me and at my internship.

(The Eiffel Tower at the stop Trocadéro)

(Me on the first floor of the Eiffel Tower) 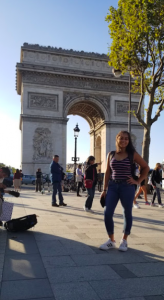 (This is when my friend, Lidia, and I decided to go visit Le jardin de Luxemburg (the Luxemburg Garden) in Paris) 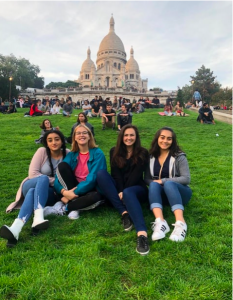 (My friends Lidia (far left), Allie, Emily, and me at Sacré-Coeur enjoying the nice day)

Trips You Will Tell Your Kids About Someday: New Zealand