I was surprised by how difficult it was for me to initially settle into my new (temporary) life in Cambridge. Everything was unfamiliar. I did not understand the behavioral or conversational customs. Certain things about life in Cambridge, which I never thought I would notice, created discomfort. For example, Cambridge is an incredibly old town. The sidewalks are surprisingly narrow and the storefronts and businesses inhabit old, quaint buildings. When inside these buildings, the hallways and seating areas are extremely small. I never assumed that these small differences in culture would create noticeable discomfort. But, initially these cultural differences caused me to feel like an outsider. I certainly felt like I stuck out. Regardless, I am starting to settle into my life here and appreciate aspects of their culture which was once unfamiliar. 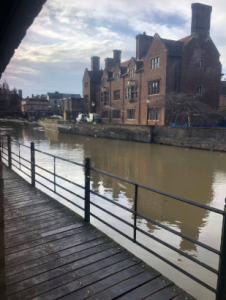 This walkway although beautiful, is incredibly narrow! 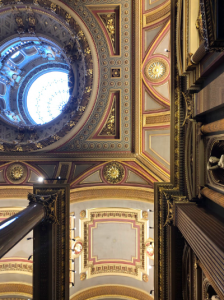 A museum in Cambridge with beautiful architecture

I have always had an appreciation for the architecture of a city. I absolutely love that architecture can reflect the culture of the city but can also differ so greatly across countries or even towns themselves. Architecture can also reveal a lot about the history or the city. One can learn much more about the complexity of those living in Pompeii by studying the architecture and organization of their city. By studying the architecture of a city, I can appreciate its beauty but also understand more clearly the cultural and historical context with which the city was built. Luckily, Cambridge is a city rich in history and full of beautiful, colored buildings. Upon arriving to Cambridge, I would walk throughout the city focusing specifically on its architecture. I would research various buildings in Cambridge and seek information about how the city was built. I have found that by familiarizing myself with the culture of  Cambridge, I have felt more connected to the culture. I would suggest study abroad students to similarly find a way to connect to their country’s culture so that they can hopefully feel more comfortable.

Most importantly, I urge all study abroad students to allow themselves to relax. As American students we are accustomed to running from class to various meetings. In our spare time we complete countless hours of homework. We seem to always maintain a certain level of stress. Although it is crucial for students to devote a generous portion of their time to their schoolwork, it is equally important to care for one’s mental health and general well-being. Moving to another country is stressful. But studying abroad is a unique experience which allows us to be students but also travelers. Without the time commitment of clubs and weekly meetings, I can be a student but also try cooking new recipes and explore the city more. Studying abroad has allowed me to explore my other identities besides my identity as a student. In doing so, I find myself investing more time into my studies but also into my own interests and passions. 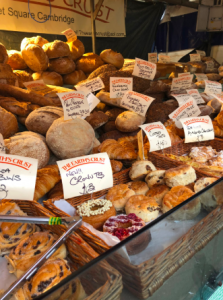 A market I found while exploring Cambridge with many different kinds of food stands!

Ultimately, settling into a new country will be overwhelming and difficult. Yet, the discomfort of living in a new country is short lived when you can learn to appreciate the culture of the country you are living in. However, I am having fun exploring the city and pursuing my interests in the meantime. 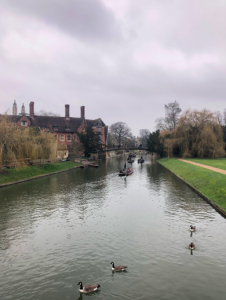