Reflections in the Cam 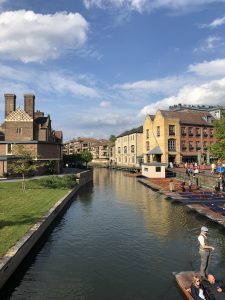 The River Cam (taken on my last day)

In between hectic packing and cleaning, I managed to squeeze in one last walk through the City Center the day before I moved out of Cambridge. I could feel the bittersweet weight of goodbyes settling into my chest as I crossed the bridge over the river Cam, automatically shaking my head at the eager Punting guides. This is the last time…kept running through my mind.

But I knew I’ll be back someday; I had often imagined my future self as we met many Valpo alumni over the semester who came to see the house again, exclaiming with nostalgia as they found their Cohort’s photo on the wall. But I also knew that it would never again be the same Cambridge that I’ve grown to love so deeply over the past four months. 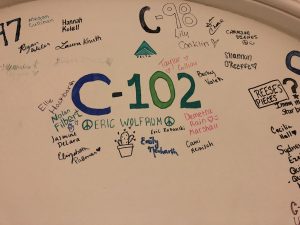 Cohort-102: leaving our legacy at our Cambridge home.

There had been multiple nights (mostly in February and March) where I had cried myself to sleep, homesick and longing to return to my family, friends, and pets. But at some point along the way, I suddenly found myself longing for more time in Cambridge.

I think it took many ingredients for me to unknowingly concoct the potion that really opened my eyes to how quietly my time was passing by, how little I had left, and that I really didn’t want it to end. Maybe it was the rapid change of pace with final papers and presentations, or letting go of the many unrealistic expectations I had placed upon myself, or finally throwing myself 110% into deepening our cohort relationships, or the “we only have ___ weeks left!!” type of memories we were making, or something else entirely. 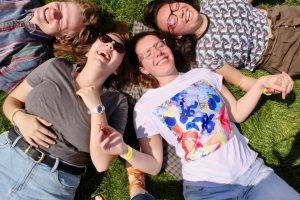 (THIS PHOTO WAS NOT STAGED) Mellie, Demi, Jasmine, and I

Almost all of my trips to mainland Europe happened during the second-half of my semester, and every time I returned to Stansted Airport, the bus or train ride to Cambridge felt more and more like going home.  I’ve said it before in a blog post, and I’ll say it again— the family that grew out of 26A Huntingdon Road, will forever be the most valuable and life-changing piece of Cambridge for me. January hadn’t even passed by the time we started yelling, “I’m hooooome!” every time we walked into the living room after being gone (for an hour or for a weekend).

Unfortunately, I think four months is just enough time for a foreign place to become familiar: to feel at ease in a crowd of locals, to slowly collect grocery stores and pubs that become your “regular” spots, to walk down streets and be greeted with memories rather than curiosity. But one of the best parts of Cambridge is its ancient history, and it is comforting to know that Castle Mound will always be an ancient Roman ruin that overlooks the city, and that as my eyes adjust when walking into King’s Chapel, my breath will always be taken away— at least for a moment. 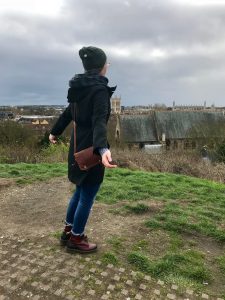 When my sister Eva visited, she slyly captured my quiet ritual of taking in Cambridge from the top of Castle Mound

One of the things I struggled with while abroad was worrying that I wasn’t “challenging myself enough,” or that I wasn’t growing as much I ought to be.  This irrational fear was in response to a mixture of American culture’s pressure to always be productive, the way that I had perceived others’ experiences abroad, and my own bad habit of romanticizing the future. 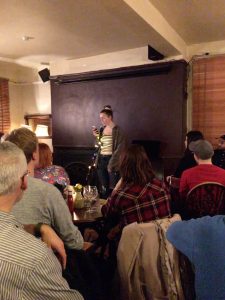 One of the moments I’m most proud of: spontaneously reading some of my poetry at local pub’s Open Mic event (special shout-out to the friends who pushed me to do this!).

In retrospect, it was probably only once I was able to let go of that fear which sparked my semester’s turning point. When I left Cambridge, I still did not feel like I had changed (at least not as much as I “should have”), but I could see that I’d grown by truly coming to terms with and being okay with that.

Now that I have been home, visited Valpo, and have begun catching up with my friends and family that I missed beyond words, something I did not anticipate has happened. Of course hindsight always helps, but it seems like I needed to be placed back in my old environments and settings before I could see that I have indeed changed. Thus, this summer (and more, I suspect) has already been a continuation of my abroad experience, as I am slowly discovering the ways—both subtle and instrumental—that I have grown while living in Cambridge, England for four months. 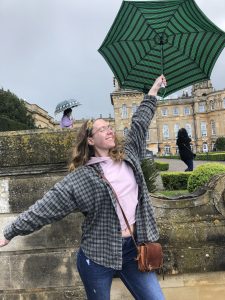 That’s a wrap! With much love and a fond see you later, I say: farewell, England. (Taken at Blenheim Palace)

Trip to the Blue Mountains