Hello friends! About 2 months ago, I was researching flights with some of my friends, trying to find the cheapest option to get out of Viña del Mar and explore a different part of Chile. And I found an incredibly cheap flight to Easter Island (called Rapa Nui by the island inhabitants or Isla de Pascua by Spanish-speakers). It was about $250 roundtrip, which is especially cheap because usually flights can go for around $1000. So I booked immediately, even though none of my friends wanted to go (their loss!). It would be one of the major solo trips that I’ve taken this semester.

So on Wednesday, I caught a 5am bus from the Viña del Mar bus terminal. I had a 9:30am flight, and wanted to make sure I was at the terminal with plenty of time. But about an hour into the bus ride, I was sleeping and suddenly heard the bus driver tell us that we would have to get off, unload all of the luggage, and get onto a new bus to continue the journey to the airport. We were given no explanation. So around 6am, we were all standing on the side of the highway in the cold, waiting for another bus to come pick us up. Off to a great start! I really thought that I was going to miss my flight, but thankfully, the other bus came around 7am and I made it to my flight with about 20 minutes to spare.

The flight was technically a domestic flight (Easter Island is a Chilean territory), but lasted about 5 hours. It’s the most remote inhabited island in the world, and has a population of about 7000. As soon as I stepped off the plane, I immediately saw how incredibly green everything was, and felt the sun and the ocean breeze. It was such a nice change from the clouds and rain in Viña del Mar! I spent the first day on the island getting to know the other people in my hostel, and wandering around the center of town. I visited a quiet beach with clear blue water, and saw the sunset from the best place on the island, according to locals. I could see a few of the iconic Moai statues (built around 1400 AD), with the sun setting and the clouds changing colors behind them. 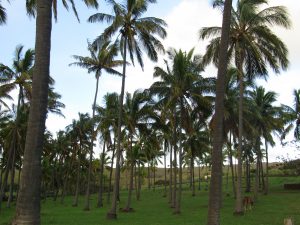 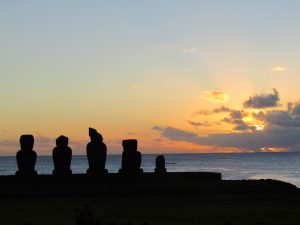 The next day, I wandered around the city center with a new friend from New Zealand, who was traveling around South America for 6 months.  We walked along the coast for a few hours and stumbled upon some caves that served as the protection for the indigenous people during attacks, many years ago. After walking for a few more hours, we sat on a tiny beach near our hostel, surrounded by cute dogs. So relaxing! And later on that night, I went with some new friends from my hostel to a performance of the traditional dance of the island, called Kari Kari. It was so entertaining! I could see on the performances’ faces that they genuinely enjoyed dancing and loved showing their culture to visitors. That made it even more engaging and fun to watch. At the end of the show, all of the dancers went around and took pictures with people from the crowd. 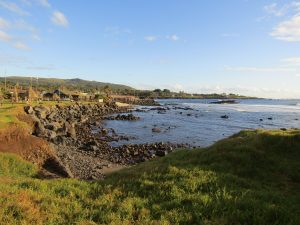 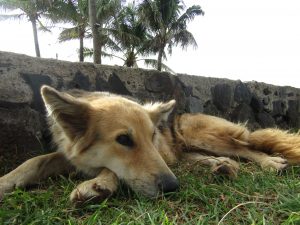 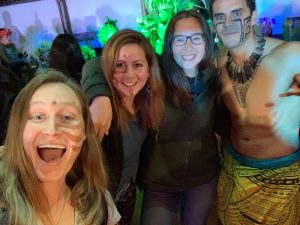 With two days left on the island, I fully intended to take my time and explore the majority of the island. So I found a few Chileans (an older married couple from the south of Chile and a younger woman from Viña del Mar) who were going around the island in a rented car. We left at 5:30 in the morning to catch the sunrise from the best place on the island, called Ahu Tongariki. When we arrived, we could still see the stars. After waiting for a few minutes for the park entrance to open at 7, we entered and I could see the 15 infamous Moai statues. We stayed there for about 2 hours, simply watching the sky change around us. Every few minutes, the colors would completely change. It was one of the best sunrises I’ve ever seen in my life. After, the Chileans and I drove around the island to a few stops, like a beautiful beach called Anakena, which had a herd of wild horses grazing underneath the palm trees. Such a beautiful, tranquil place! 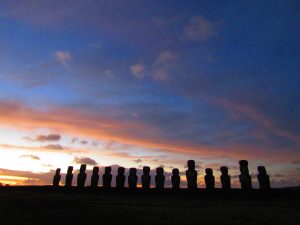 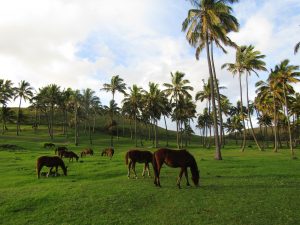 My last few days on the island were spent with my new friends from the hostel- a few Chileans, an international couple from Germany and France, and a traveler from New Zealand. It was really cool to meet so many people from around the world, and really fun to swap travel stories! And I’ve come to learn throughout my travels that although I might start a trip solo, I never actually end up solo. I always meet new friends, who are really interesting and very open to hanging out with a solo gringa from Chicago! And because of that, I’ve come to love my “solo” trips, and I’ve gotten much more comfortable going off on my own. Plus I love telling all my friends to go on a solo trip too! It’s a great way to learn about your own abilities, increase your independence, and meet new friends from different parts of the world. So next time you want to go somewhere but none of your friends want to go with you–go anyway!

Reflections in the Cam