Okay, so I am officially through the halfway point of the semester now. There is still so much I want to do it, but I am very happy with what I have seen and done this month. It has been awhile since I posted, so I figured I would talk about some of what I have experienced over the past few weeks.

This place is very well known and a very hot tourist spot, but I can say there is nothing like it in the states and is well worth the trip. I would like to come to Nara once more before the semester ends, as we only really had time to go to the park and some of the shops in the city. Our journey was delayed that day because someone jumped in front of a train on the Kintetsu line (A sad reminder that mental health and suicide is one of the largest problems Japan has – looking at this may be a future post) and it was hard to find an alternative route.

However, the park was amazing. The deer roam completely free, and years of exposure to humans means that they have no fear. If you bow to them, they will sometimes bow back. Deer snacks can be purchased at the park and hand-fed to them. I have heard some stories of over-aggressive deer, but I think most Americans would find them extremely tame. The most aggressive deer I encountered just kept following me around until another visitor lured it away with their own snacks. 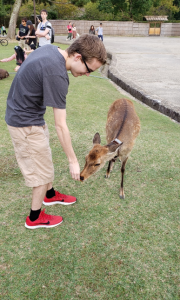 I would highly recommend feeding the deer. 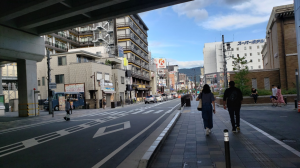 The main city/shopping area of Nara.

Kobe is a more modern port city to the west of Osaka. There are not as many shrines or historical locations when compared to Nara or Kyoto, but it is a large urban city with its own distinct culture while being smaller and more compact then Osaka.

I need to do more exploring, but I would say to visitors that eating Kobe beef is a must, along with visiting Kobe port tower and the surrounding area. Another student that came here went zip-lining. 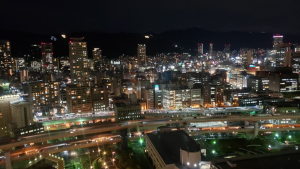 View of Kobe from the top of Kobe Port Tower. 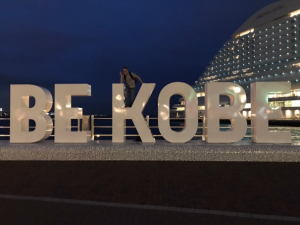 This is right by Kobe Port Tower. Recommended photo spot.

I have not been to Universal Studios in America, so I cannot draw comparisons between the two, but I enjoyed my time here. The crowds are massive though, especially because we went on a national holiday. The over-crowding can almost be overwhelming. We were only able to get on a few rides, but I think being able to walk around and take in the atmosphere was worth it. USJ also has the most over-priced food I have yet to encounter in Japan, so that may be another thing to take into consideration. Lastly, I did not realize how huge Halloween was in Japan. Many, many people were dressed up in the park that day and it was not even Halloween week yet. 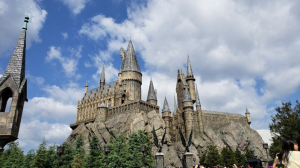 Outside of the Harry Potter attraction at USJ.

My favorite thing about Japan is just how many insane shops, malls, markets, etc. there are. Malls in the United States are dying, but in Japan they are still thriving. Also, they are huge. I have been to the local mall in Hirakata four times. I also went to markets in Nipponbashi, Osaka, and ate some of the most incredible food. Fried eel, fried pineapple, a whole pineapple with juice and ice-cream inside, and so on. There is an infinite amount of fun and interesting things so close together, especially in the Kansai region. I can’t wait to see what happens in the second half of the semester! 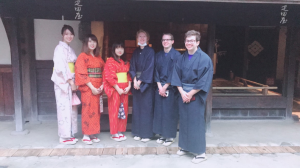 We rented Kimonos after exploring Nipponbashi.

When Homesickness Hits: Feeling Lonely on the Other Side of the World