When studying abroad, students often take the opportunity to travel around their country of study or surrounding countries. For students studying in Europe they usually stay within Europe; however, my roommate and me decided to test the waters and go to Egypt. Originally the idea started off as a joke, but as other students in our program kept doubting our survival in Egypt, it turned into a reality. When planning our trip, we looked into the cultural behaviors and cultural mindsets of the area that we would visit. We learned that wearing loose fitting pants and having our shoulders covered was more appropriate during our stay. We also learned through our research that we needed a travel visa for the time in which we were staying. Luckily, the travel visa was available for us to purchase and receive at the airport in Cairo when we arrived early Thursday morning.

After getting our travel visas and exiting customs at two in the morning, my roommate and I were bombarded with people asking us whether we needed a taxi. Although we were offered several offers, we decided to stick with ordering an Uber on the app because it felt the safest. However, while ordering our Uber another “Uber driver” approached us and offered a higher priced ride; after we declined, he continued to follow us throughout the airport to our actual Uber pick up point. Thus, our first impression of the Egyptians was that they were persistent.

When we arrived at our hostel on Tahrir Square at four in the morning, we decided to sleep in and then explore the city on our own. After waking up, we ventured out and walked on a bridge above the Nile River and around parts of Cairo and Giza. During our walk, we got to experience the crazy streets of Egypt and quickly learned that in order to get to the other side of the street, you just need to walk without fear in the middle of traffic. 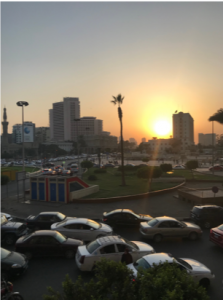 The view of Tahrir Square from our hostel room.

On the second and third day of our stay, we had a tour guide to take us to different attractions in the area. On Friday, we visited the Cairo Citadel and the Mosque of Muhammed Ali, here we were required to remove our shoes and make sure our shoulders were completely covered because of religious and cultural reasons. 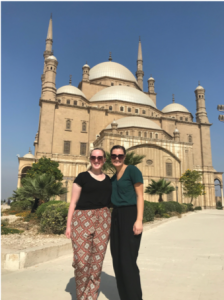 My roommate and I at the Cairo Citadel

The Mosque was also the place where I learned that more Egyptians were taking pictures of my roommate and I than the actual attraction. For example, while I was taking a picture of the inside of the Mosque, I was asked to take pictures with young children by their mothers. At the time I did not understand the reason why this often occurred, but I learned by the end our trip. After the Mosque, we visited the Egyptian Museum, went on a felucca ride on the Nile River, and visited the Khan el-Khalili. During our time in the museum, once again, people were taking more pictures of me than the artifacts. Then in the Khan el-Khalili, which is a huge market area, we experienced more persistent Egyptians trying to get us to make purchases. Also, we utilized our bargaining skills in the market and other shops in the streets of Egypt because in a majority of shops there are no fixed prices, a notion which was different from both the United States and Germany.

By our third day in Egypt we were accustomed to the persistence of the people. Thus, when we visited the Pyramids of Giza, we were able to ignore the people and truly enjoy our time. At the Pyramids of Giza, my roommate and I witnessed the towering and ancient pyramids by foot and by the backs of camels. While having our hour-long camel ride we were able to witness beautiful views of the pyramids and surrounding areas. 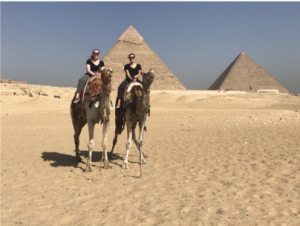 My roommate and I on a camel ride around the Pyramids of Giza.

Therefore, I suggest, if one is ever in Egypt, to ride camels because it is both a unique and weird experience. After the pyramids, we learned about the different types of oils and perfumes sold and produced in Egypt, as well as how it affects the country’s economy. Then, we learned how ancient Egyptians created and utilized papyrus paper. After our tiring day, we returned to the hostel and left the next day to return to our university in Germany.

Although we only spent a few days in Egypt, I learned about a culture that was both different from the one I’m from and the one I’m studying in. Also, I learned that when visitng another country with a different culture, one needs to remain patient and open-minded or else that culture could be misundertsood. When remaining patient and open-minded, the true version of that culture will unfold before your eyes and only then can one accurately say whether they understand or not.

The Bongic Community and Naso People